Why Vote Against the Québec Government Offer and Continue Student Strike

Since Saturday, some people have come up to me expressing their delight a strike that is finally over, now that a negotiated agreement has been made between the government of Québec and striking students. My reply is that “nothing can be further from the truth.” Here’s why. 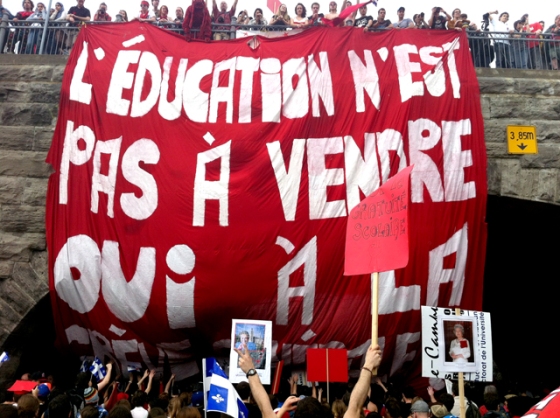 “Education is not for sale. Yes to the general strike.” Photo March 22, 2012 by David Widgington.

The most obvious reason for rejecting the offer is that there is nothing in the so-called “agreement” that addresses the tuition fees nor offers any proposal for reducing the 82% tuition increase over seven years. The “agreement” that students are voting on this week, proposes to end the crisis with the establishment of a Provisional University Council (PUC), whose mandate would be to make recommendations to the Minister of Education by 31 December 2012 about “the optimal utilization of universities’ financial resources and show, where they exist, recurrent savings that can be freed.” These potential (but not guaranteed) savings would not reduce tuition increases but would instead transferred to diminishing the $500-$800/year user fees universities have been allowed to increase over the last few years. If no savings can be “freed” then status quo prevails. As a temporary measure, $125 in user fees will be reduced to compensate for the tuition increase during the 2012 fall semester. At the beginning of the strike, Premier Jean Charest and Education Minister Line Beauchamp argued for tuition increases to resolve university underfunding. Their offer now claims that universities have more money than they need, allowing them to squander millions on severance packages, luxurious promotional trips and marketing campaigns.

This 19-person Provisional Council would effectively audit universities to flush out administrative spending abuses. Based on the composition of the Provisional Council (six university rectors, four union members, two people from the corporate sector, one CEGEP administrator, two government bureaucrats and four student representatives) it is doubtful that it will have any genuine motivation to criticize university spending practices and recommend budget cuts to reduce student fees. And there are no provisions that prevent universities to continue to unilaterally increase user fees. Education Minister Line Beauchamp is quoted in Le Devoir as saying, “if gains for students are to be had, they still need to be calculated and are not guaranteed,” already opening the door for the Provisional Council to declare that university spending practices have been optimized and that no money can be “freed” from the budget.

I will vote against the government’s offer because it is a pre-election smoke screen aimed at further dividing the population and improving its position in opinion polls that show 62% support for tuition increases but an even higher percentage that believes Jean Charest mismanaged the student crisis.

Collectivity and the Classroom Without Guarantees

“Capitalist imperalism is an effort to win the world for calculation” – Gayatri Chakravorty Spivak, Death of a Discipline, 54.

“Politics of Friendship is, in other words, only a book between covers. For the real text, you must enter the classroom, put yourself to school, as a preview of the formation of collectivities. A single ‘teacher’s’ ‘students’, flung out into the world and time, is, incidentally, a real-world example of the precarious continuity of a Marxism ‘to come’, aligned with grassroots counterglobalizing activism in the global South today” —Gayatri Chakravorty Spivak, Death of a Discipline , 28.

After the funeral procession, students mourn the loss of accessible education due to tuition increases as proposed by the Québec Liberal government. Photo taken in Montréal's Parc Lafontaine, Friday, March 16, 2012 by David Widgington.

As the number of students on strike approaches 270,000 this week, the minister Line Beauchamp declared ‘We’re not in a negotiation. A decision has been made’. The president of CEPAL, Philippe-Olivier Daniel, meanwhile sent a formal notice to student associations to ‘stop infringing on his right to attend classes’.[1] These different standpoints, figured in public discourse as the site of agonism in the public sphere (if not antagonism), figure for us the importance of the question of collectivity, and the relation of collectivity to pedagogy.

The student action would seem to pose the question of collectivity in the demonstrations, strikes and actions, and this is certainly a location for important coalitional work among students, and between students, faculty and the public. But the student’s stakes in the matter also are to preserve another form of collectivity (signalled by the second epigraph above): the collectivity of the classroom itself…

…. Continue reading the essay at Alt-UniEs: an alternative university, an appeal to unity, a commitement to access ….

Students and faculty from Concordia University’s Communications Studies Department march in the streets of Montréal with 30,000 others (according to Le Devoir) in the Family Demonstration March against the Québec government’s proposed tuition increases.

Communications Studies students and faculty are well represented among the 30,000-strong crowd at the March 18, family demonstration. Photo by David Widgington.

students walk down St-Denis street among 30,000 others in the family protest against proposed tuition increases, Mar 18, 2012. Photo by David Widgington.

30,000 protesters in the family demonstration against tuition increases and in support of access to education walk eastward along rue Ste-Catherine past Metro Papineau. Sunday, March 18, 2012. Photo by André Querry © 2012.

The $1,625 tuition fee increase has nothing to do with the quality of education or the value of a degree. In fact, the increase of tuition fees (the largest in the history of Quebec) will force thousands more students into debt, to work harder or even drop out.

This website was created in response to the Quebec Ministry of Education’s misinformation campaign—a campaign that cost taxpayers $ 50,000.